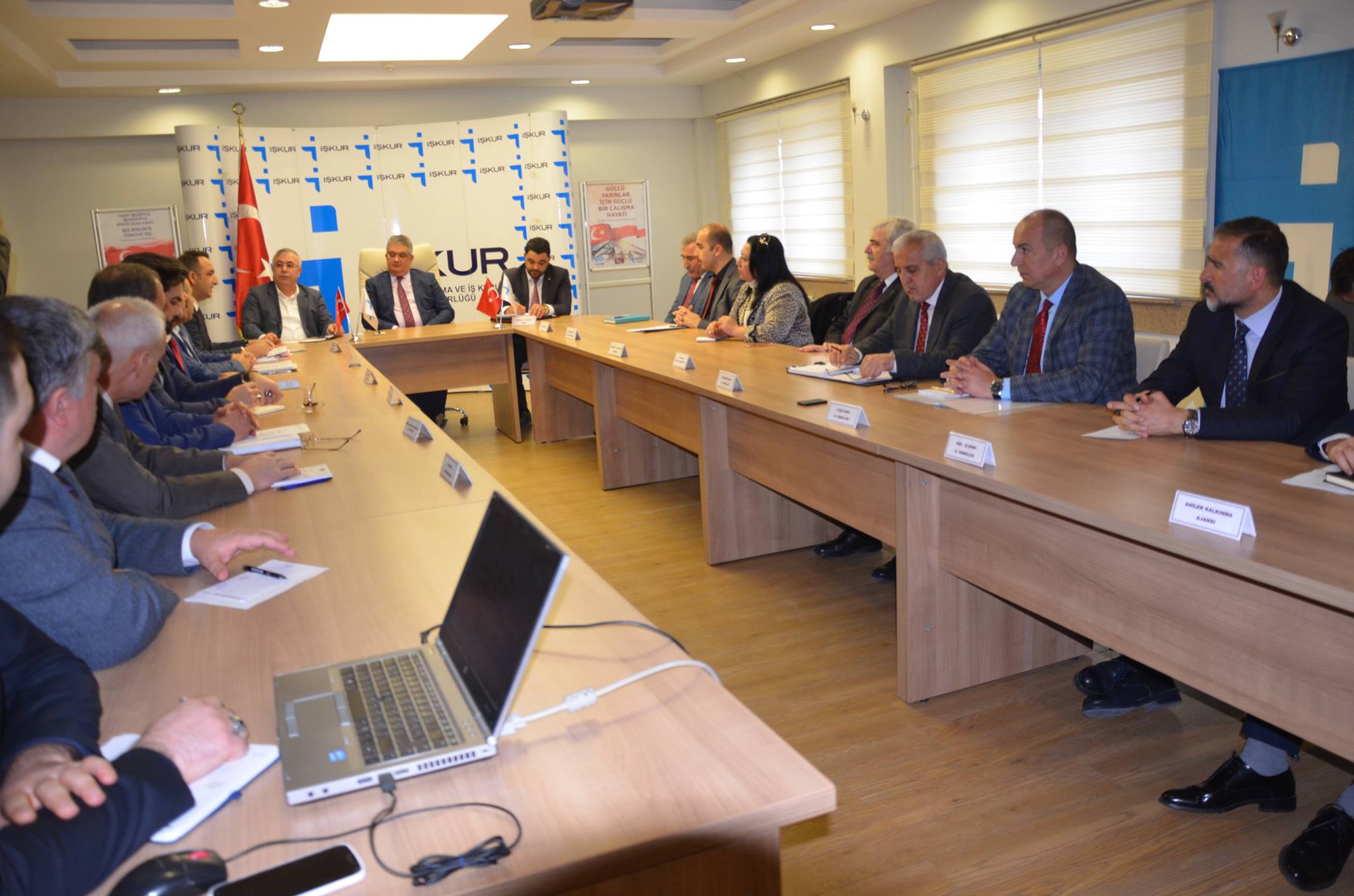 The meeting was attended by Aksaray Chamber of Commerce and Industry President Ahmet Koçaş, Aksaray Commodity Exchange President Hamit Özkök, Chairman of Tradesmen and Artisans Chamber Doğan Ceylan, SGK Provincial Director Bilal Akgün, İŞKUR Provincial Director Mahmut Akkuş, Entrepreneurial Business Women Association President Hatice Şahin Eroğlu and corporate directors attended. Provincial Director Mahmut Akkuş gave information about the details of the program, the program will be given the amount of 773 TL told the support of the employer. Akkuş also explained the conditions necessary for the purchase of the support. "We want to get the support from the unemployed registered in İŞKUR and the employer should not be the SGK borrower." We want to create a good awareness in Aksaray. said.

Akkuş stated that the employer is paying the salary of the 3 month insurance when he employs the worker and then he will continue with the new program and benefit from the tax deduction of 773 TL until 31 December. Public institutions that want to join must also apply by Friday.

It starts in our employment guaranteed vocational training courses. Bilk Akgün, Provincial Director of SGK, stated that they expressed their interest in this program by visiting 52 companies themselves and their team. "We have 330 business establishments as social security inspectors Visited and told the program.

Aksaray Chamber of Commerce and Industry Chairman Ahmet Koçaş stated that they would give the necessary support for this program which is on the agenda in the Economic Chamber Meeting of the Chamber of the Turkish Chambers and Commodity Exchanges of Turkey, "As you know, the Turkish Chambers and Commodity Exchange Association, There are 1 and a half million of them. It was over a speech that one and a half million members were hiring one person and contributing to the program. We are in consultations. We traveled 7-8 factories with our property. Many businesses have initiatives to grow their business.

We have a desire that the unemployment figures go down to around 4 percent and that Aksaray is the winner among the least unemployed. Day is a day of solidarity. Your government has a tax cut of 773 liras which is a great opportunity for the last 11 months.

I think that our employers should benefit from this opportunity. I have 4 thousand 200 members. I think it will contribute to this program by employing over 5 thousand workers together with all our sails until the end of the Feast of Sacrifice. We signed a contract for 10 people with the ice cream factory. This program will provide the necessary support from Aksaray, "he said.

Hamit Özkök, Chairman of the Commodity Exchange stated that it is an honor for them to give good support to the National Mobilization Program in their working life. "We have a mandate for the President of the Republic of Turkey to follow this issue to the governor of 81 provinces. We will make contribution to this program by giving about 5 thousand support.It will do everything that falls on the patriarchy.If people give shoulder to shoulder it will get rid of the stone.I thank the SSI directorate and İŞKUR directorate.I have very good dialogue with both our employers and employers.The bureaucracy is the fastest It is very important to speed up and we want support in this regard. " said.

Aksaray Governor Aykut Pekmez stated that the insurance of 773 TL insurance should be told by the government to the employers. "Aksaray's economy is continuously improving." Based on the last 15 years, there is an OIZ where Organize Industrial Zone is 100% full and 800 hectare area and 500 hectare area.

One of the things we care about is the railway. This year, the project and tender will be done in a short time Aksaray will reach the north-south connection. Railway Aksaray will affect our industry considerably. The year 2016 is a year of rising unemployment, but this rate has decreased in Aksaray.

This is also reflected in the export figures. Due to the fact that some companies' centers are not here, our export figures are even less than their real level. Our economy and the purchasing power of Aksaray are constantly increasing. We will see what we reached on the 31st December at the closing. "